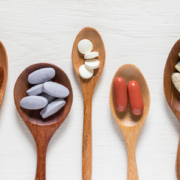 Trying to bring a new child into the world tends to make us question all aspects of our lives!  Am I eating a well-balanced diet? Am I moving my body enough throughout the day? Is this headache medication safe while trying to conceive? What about my shampoo? Am I getting enough sleep?  Am I stressing out about all of this too much and causing more harm than good?

Nutritional supplements are just one more area of life you might find yourself reevaluating in light of your desire to conceive a child. Adding a prenatal vitamin is a no-brainer. And you might have heard the recommendation from healthcare providers to add a folate supplement as well.

But have you considered adding a powerful antioxidant like coenzyme Q10 to the mix? If so (or even if you’re not!), read on to find out how this could help you!

If you haven’t thought about free radicals and antioxidants since your high school chemistry class, you’re certainly not alone! Here’s a crash course in case you’ve long since packed away your textbooks!

Free Radicals: Building Up in the Body and Causing Chaos

This makes these unstable free radicals bind easily with other molecules in the body. These molecular combinations can cause very long molecular chains that have the potential to cause quite a bit of damage in the body.

These unstable free radicals, then, can build up to an unhealthy level. This results in oxidative stress, which can cause inflammation and other undesirable side effects. These could include autoimmune disorders, pain, cancer, and metabolic problems. This may also have a negative impact on fertility levels in both males and females.

Antioxidants to the Rescue!

In this way, antioxidants help provide a safer environment inside the body. They can also prevent cellular damage from oxidative stress caused by a buildup of free radicals.

Some Potential Benefits of Coenzyme Q10

Coenzyme Q10, or CoQ10, is a very powerful antioxidant. Research on this antioxidant is ongoing, and more studies are needed. But some current studies suggest that coenzyme Q10 could have benefits such as lowering risk of heart disease, migraine, and secondary heart attack after another cardiac event.

Coenzyme Q10 and Its Impact on Female Fertility

Even though more human studies are needed, preliminary studies have shown that supplementation with coenzyme Q10 could promote improved egg count. It may also possibly improve egg quality.

Coenzyme Q10 has also been linked to improved ovulation rates in patients with polycystic ovarian syndrome who are seeking ovulation induction through Clomid. There is also some evidence to suggest that it can contribute to improved ovarian response during IVF cycles.

It’s important to remember that while coenzyme Q10 has shown some promise in improving egg quality, most studies that have shown significance at the statistical level have been studies in animals. Human studies have been limited and have shown a limited benefit. (It may also be possible that the studies are too small to show coenzyme Q10’s full benefit.)

Coenzyme Q10 and Its Impact on Male Fertility

Studies have also shown that supplementation of coenzyme Q10 in males may increase their sperm concentration (number of sperm) and motility (movement of sperm).

Do You Have More Questions About Coenzyme Q10 or Another Supplement?

So the jury is still out on the actual benefits of coenzyme Q10 use in humans. But it appears to have promise, and supplementation with coenzyme Q10 is generally considered safe.

We know that trying to conceive can be a tricky time. So if you’re finding yourself analyzing and reanalyzing everything you put into your body, it might be time to consult with a specialist in the integrative fertility field who can help take some of the guesswork out of the equation for you.

Dr. Salem and her team are experts at finding the right fertility protocol for you. If you’d like to talk about whether or not coenzyme Q10 is appropriate to add to your supplement regimen, reach out today to schedule a consultation! 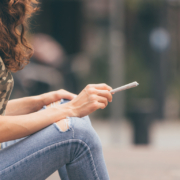 Maryjane. Cannabis. Reefer. THC. Pot. Marijuana. Dope. CBD. Weed.  No matter how you refer to it, this controversial little plant has gotten a lot of media attention in recent years!  And as more and more states move toward the legalization of recreational marijuana, some may begin to wonder: Can cannabis use affect my fertility?

It seems like so many claims are being made that marijuana can help a wide variety of ailments… Could infertility be one of them? Or is it possible that marijuana could actually decrease your fertility and interfere with your efforts to conceive?

What’s the Difference Between Cannabis, Marijuana, THC, and CBD?

There are a lot of names used for cannabis that all have slightly different meanings. So let’s talk about that!  Cannabis sativa is the Latin name for an herbal plant. The word “marijuana” is typically used to refer to this plant and its many uses.  Marijuana has traditionally been thought of as an inhaled drug (either in a cigarette, cigar, or vape pen). But it can also be eaten in foods, or taken medicinally or recreationally as an extract.

Tetrahydrocannabinol, or THC, is the psychoactive component found in cannabis. It has a slightly shorter growth cycle than CBD. Most cannabis that is used for medicinal or recreational purposes has a high concentration of THC (normally between five and 35 percent). Products that contain THC can be used in foods, topical medications, and tincture oils.

Cannabidiol (often called CBD) is not psychoactive and has a longer growing cycle. Most CBD products have a very low percentage of THC (usually less than 0.3 percent THC). CBD can be used in food, beauty products, and medications.

How Does Marijuana Act in the Body?

People ingest cannabis derivatives for a number of different reasons. Most of these reasons involve an attempt to make their body feel a certain way after they consume cannabis.  Whether they are trying to relax, achieve a high, relieve pain, or increase appetite, marijuana acts in a variety of ways in the body.

Cannabis changes the way your brain processes information, so it can cause memory problems, especially with repeated use over time. Cannabis can also slow your reaction time, which can make driving and other tasks that require quick thinking skills more dangerous.

A brain chemical called dopamine is responsible for heightening the senses and causing a feeling of pleasure or euphoria. Dopamine is also one of the hormones responsible for the pain- and inflammation-relieving effects of marijuana use.

Marijuana and its byproducts affect the physical body in a variety of ways.

Just like cannabis affects all the other body systems, it has some effects upon the endocrine and reproductive systems as well. This is true for both males and females.

The Effect of Cannabis on Female Fertility

Long-term exposure to THC can affect the pituitary gland, slowing luteinizing hormone and prolactin hormone production. Women who smoke marijuana regularly are at risk of not ovulating because high doses of cannabis use can throw a wrench in your menstrual cycle.  Higher doses of cannabis can also interfere with a woman’s sex drive, which makes natural conception less likely.

The Effect of Cannabis on Male Fertility

Marijuana usage has been associated with lower sperm count, sperm quality, and concentration of sperm in the semen. It can also affect sperm morphology (shape), motility (ability to swim and maneuver through the uterus and fallopian tubes),, and viability (ability to successfully fertilize an egg).  Cannabis has been shown to reduce libido in males as well as females. In animal studies, cannabis usage led to atrophy of the testicles as well.

Still Have More Questions About Cannabis and Fertility?

Do you use cannabis medicinally or recreationally? Are you trying to conceive or considering fertility treatments? Be sure to mention your cannabis use to your fertility doctor to receive the best advice for your particular situation.  This is [particularly true if you rely on THC or CBD for your daily functioning. (This might include pain relief, controlling the symptoms of an autoimmune disease, or cannabis dependency.)

At Integrative Fertility M.D., we understand that your medical situation is unique. We would love to chat with you about how we can help you in your journey to conception and parenthood. Get in touch today to book a consultation!

This site uses cookies. By continuing to browse the site, you are agreeing to our use of cookies.

We may request cookies to be set on your device. We use cookies to let us know when you visit our websites, how you interact with us, to enrich your user experience, and to customize your relationship with our website.

Click on the different category headings to find out more. You can also change some of your preferences. Note that blocking some types of cookies may impact your experience on our websites and the services we are able to offer.

These cookies are strictly necessary to provide you with services available through our website and to use some of its features.

Because these cookies are strictly necessary to deliver the website, refuseing them will have impact how our site functions. You always can block or delete cookies by changing your browser settings and force blocking all cookies on this website. But this will always prompt you to accept/refuse cookies when revisiting our site.

We fully respect if you want to refuse cookies but to avoid asking you again and again kindly allow us to store a cookie for that. You are free to opt out any time or opt in for other cookies to get a better experience. If you refuse cookies we will remove all set cookies in our domain.

We provide you with a list of stored cookies on your computer in our domain so you can check what we stored. Due to security reasons we are not able to show or modify cookies from other domains. You can check these in your browser security settings.

We also use different external services like Google Webfonts, Google Maps, and external Video providers. Since these providers may collect personal data like your IP address we allow you to block them here. Please be aware that this might heavily reduce the functionality and appearance of our site. Changes will take effect once you reload the page.